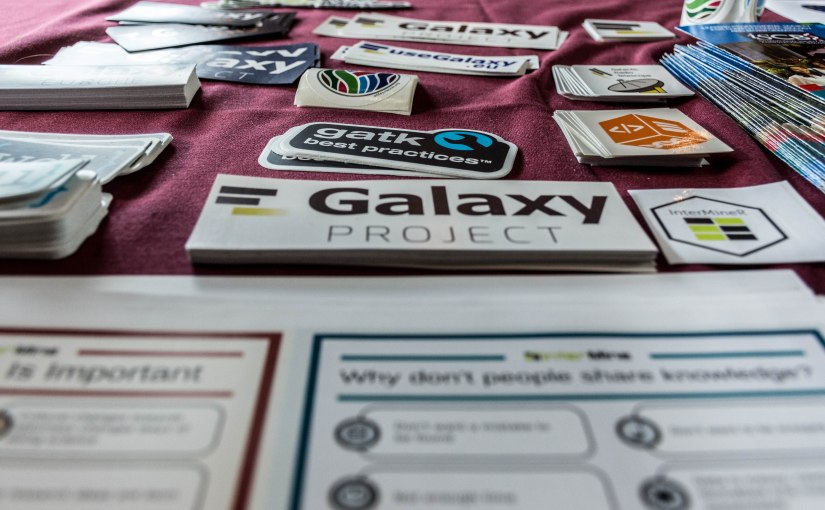 BOSC (the Bioinformatics Open Source Conference) is normally part of ISMB (Intelligent Systems for Molecular Biology), but for the first time this year, it teamed up with The Galaxy Community Conference (GCC) instead. For us, this presented an exciting opportunity – like a regular BOSC but with the added bonus of training days and the chance to interact with Galaxy contributors during the CollaborationFest hackathon (and the rest of the conference too).

Our agenda at the conference ended up being quite full:

We delivered a training session on the 26th of June: Handling integrated biological data using Python (or R) and InterMine. Leyla Ruzicka from ZFIN was kind enough to travel up from Eugene to Portland, to help us deliver the UI portion of the training. Once we’d familiarised users with how InterMine worked a little bit, Daniela introduced the API side of things, and then we spent the remainder of the session working through a series of exercises in Jupyter notebooks, live-coding on a projector so others could learn about our code and follow along themselves.

While we did recommend to people that they try to install the InterMine Python client, we also managed to work around the issue for anyone who didn’t have things installed, thanks to binder. You can still see the tutorial exercise notebooks and work through them, and we have the same set of notebooks with answers if you get stuck or need a hint. This was the first time we worked through the exercises interactively onscreen this way, but it seemed to work well! I’m hopeful we can continue providing the API portion of our tutorial this way in the future.

We had planned to do an R section, but actually ran out of time to do this – the tutorial was about two and a half hours in total. If an R tutorial is something of interest in the future though, please do let us know! You can do this via comments on this article, twitter, pop by chat.intermine.org, or email us at info – at – intermine – dot – org.

[Slides link] We were very pleased to have a talk accepted as well as the training, giving us a chance to introduce InterMine to others and talk about its history. While I was talking I mentioned that we were ranking at just under 300 stars on our main GitHub repo, and the audience kindly help bump it up and over 300! 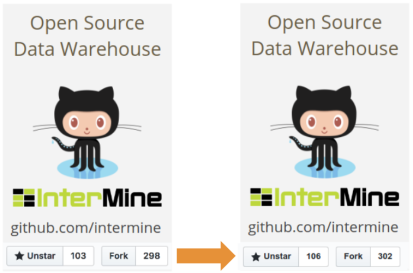 One of the topics I focused on during the talk included a massive thanks to all of the work our broader community does to help keep InterMine become and remain a great resource. Afterwards, Lorena Pantano raised the question: how do you get others to adopt your work and contribute to it?

Personally, I’ve been working at InterMine for three years now, so I certainly can’t attest to the entirely of the history – much of this is doubtless down to the team’s great work and Gos’s great vision (and grant writing!) – but I also think one of the most important parts is probably down to making it easy for others to use your work: good developer docs, tickets that explain issues clearly, help documentation for end-users, etc. I’d love to hear more thoughts about this in the comments!

Birds of a Feather sessions

Daniela and Yo both ran separate Birds of a Feather unconference-style sessions over lunch. Yo’s BoF focused on getting (and keeping) more open source contributors – Nicole Vasilevsky was kind enough to keep notes for this session. Thanks, Nicole!

#GCCBOSC Here is a notes doc for the BoF: Getting contributors to your open projecthttps://t.co/TyUMy6619Z

Meanwhile Daniela shared  the InterMine approach to implement stable and persistent URIs and the possible related issues, inspired by other data integrators and the lessons learnt in the Identifiers for the 21st century paper; some attendees have also contributed providing their own solutions.

During the CollaborationFest hackathon, Daniela and Yo were able to complete (yeahhhh!!) the integration between Galaxy and InterMine thanks to invaluable help of Daniel Blankenberg.
On the next Galaxy release, the new InterMine plugin will be available and will allow to import data (from InterMine) into Galaxy and export lists of identifiers (e.g. proteins, genes) from Galaxy (into InterMine) by selecting the mine instance from the InterMine registry. Watch this space – we’ll hopefully arrange to get some details on the Galaxy training network to explain how to run the data imports in each direction.